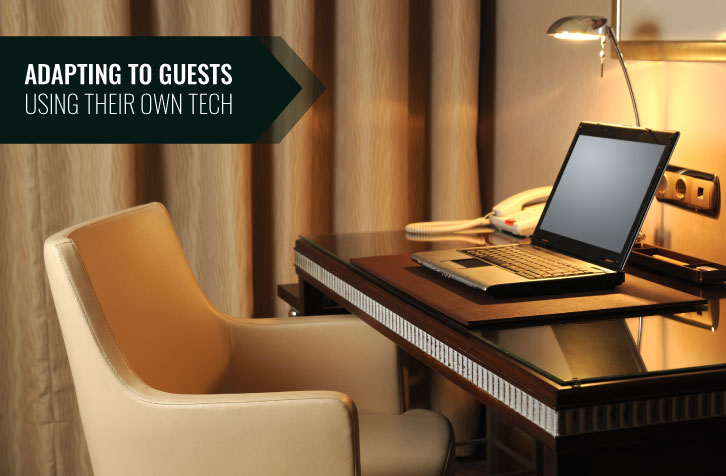 Hotel News: Guests’ use of personal devices grows during pandemic

Guests have been increasingly using their own personal tech devices during their stays, a behavior the pandemic has only encouraged, creating both challenges and opportunities for hoteliers looking to meet their guests’ needs.

REPORT FROM THE U.S.—Guests had been increasingly using their own personal devices during their hotel stays before the pandemic began, and now that use has further grown as they look to avoid contact with others where possible.

As more guests use their own computers, phones and tablets for work, entertainment and communication, they further accelerate changes hoteliers are making to their properties, both operationally and physically.

Personal devices have made everything convenient, which is why the usage was already on the rise, said Travis Johnson, hotel manager of TradeWinds Island Resorts on St. Pete Beach, Florida. Now guests are using them oftentimes in situations that allow them to avoid using public equipment. They’re also using them while they’re working remotely or for online learning.

“Technology has allowed us all to become very comfortable utilizing our own devices,” he said. “As hoteliers, I think it is important for us to find opportunity to allow guests to utilize their own devices more and have compatibility.”

The increased use of personal devices isn’t a surprise to any hotelier paying attention to guest behavior, Yours Truly D.C. GM Kristofer Carlson said. The pandemic, however, has moved the timeline forward by about four or five years.

Guests’ use of their own devices expands the possibilities for their use of mobile check-in and check-out, Hotel Equities COO Bryan DeCort said. Guests had been less excited about embracing those, but as they look to avoid direct contact with others, there’s a desire to use them more. That opens up opportunities for ordering room service, reserving areas of the hotel, such as the pool or fitness areas.
“You’re going to continue to see movement toward that, and so I think of the app functionality, of the one-stop shopping,” he said.

While the brands are pushing for more use of their apps, the increasing use of personal devices opens opportunities for independent hotels as well, Carlson said. His hotel has an app under development that will be ready soon that will have a virtual concierge and direct team communications added to it.

“Even if they’re here for four days, they can use the app because now you basically have us at your beck and call, not just here at the hotel but when you’re around the city,” he said.

There was a push years ago for check-in kiosks that didn’t really catch on with guests, Carlson said. As guests use their own devices more for different functions in the hotel, digital check-in and check-out and mobile key could allow for scaling back on front-desk agents.

Embracing that technology can show a real return on investment because it means not having multiple people at the front desk, he said. There will also be a fixed cost in having someone there, but being able to pull back from several full-time employees to one would be a savings.

“I think the answer ultimately is yes, but I think it depends very heavily on adoption rate,” he said. “I don’t think you’re going to see necessarily the same adoption rate universally throughout all hotels, all segments and all submarkets. I think it’s really going to depend on what type of facility, what type of assets you have and what type of segmentation is coming into your building.”

There’s no question hotel Wi-Fi bandwidth is under great demand by guests, DeCort said. Hoteliers will see that continue as rooms and buildings get smarter and cell phone networks move to 5G and beyond. There’s going to be an acceleration, not only of demand, but of costs associated with faster and more reliable networks to keep up with demand.

Because their properties historically have a large volume of group business, their networks have the capacity to handle the increased demand from current guests, Johnson said.

“This has us positioned well for any sort of uptick in usage,” he said.

When opening a hotel back in 2015, hoteliers thought half of a gigabyte was enough for the Wi-Fi network, Carlson said. The Yours Truly D.C. reopened in May this year after a rebranding with 2 GB for its network, quadruple the capacity thought necessary only three years ago.

Since then, the property has hosted some events, including conferences and weddings, that use up a significant portion of the bandwidth, he said. The hotel is also seeing more day usage of its network from people working remotely in the guestrooms as well as from the nearby George Washington University using their public spaces while the libraries are closed.

“The crazy part is, even as low occupancy as the hotel is, we’re going through near double the amount of bandwidth we would have gone through during pre-pandemic,” he said.

Changes to the hotel

The traditional business center is a thing of the past, and most new -builds don’t even have one as a requirement, DeCort said. Guests can use Bluetooth to print something, such as a boarding pass, from a communal area in the lobby or from a guestroom and then pick it up from the front desk. If there is a requirement for one, it’s simply a standalone PC or laptop that prints to the front-desk area.

“It takes up a very, very small footprint in any kind of new construction, but those are really dying,” he said. “The traditional business center is dying or dead.”

As the demand from guests on Wi-Fi networks increases, hotels will need to continue upgrading their bandwidth and putting an infrastructure in place that allows for such improvements, Carlson said.

From a design standpoint, what has helped his property has been having a comfortable safe seating environment, he said. People are shying away from lobbies that are too tight and don’t have enough lighting. They like where they can have “warm natural light coming from outside or a glow form the lighting from the inside at night,” he said.

For the short term, the pandemic will continue to change the guest experience, but current guest behavior won’t cause a long-term paradigm shift, DeCort said. People inherently want to travel and be together and collaborate.

“You’re going to be really careful in today’s environment not to make design and long-term decisions that you can’t potentially rewind or back off of,” he said. “We believe very strongly that once this passes, and it will, that the desire to be in those spaces and activate those spaces really intentionally are going to be in demand.”