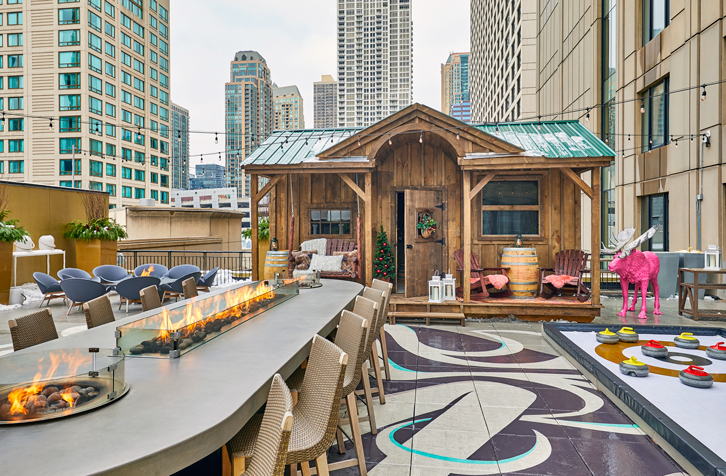 As experts on Hotel Carpet Cleaning, we love to share articles on the hotel industry when we come across them. We came across this article we thought you’d like about winter hotel amenities.

REPORT FROM THE U.S.—Winter is here, but that doesn’t mean outdoor spaces at hotels are dead until spring rolls in.

At hotels in chilly places in the U.S. such as Chicago and Boston, hoteliers have found room for outdoor activities on rooftops, courtyards and terraces.

In 2017, The Gwen in Chicago debuted a curling rink on its terrace for the winter months, said Marcus Cornelious, director of sales and marketing at the hotel. And in 2018 a “custom-built curling cabin” was added on the terrace, “giving residents and visitors to the city something fun and different to enjoy during the colder months,” he said via email, adding that both amenities open in early December and stay open through the winter months.

The rink itself isn’t made out of ice like a typical curling rink is—it’s made out of “synthetic plastic that sits on a leveled base that we build each year, in-house,” he said. Since the rink is made from plastic, the upkeep is simple, he said. Only soap and water is needed to wipe off the rink.

In addition to the rink, The Gwen has a curling cabin, which seats up to 15 people and is more than just a place for guests to warm up. It’s also a place where guests and visitors can enjoy an “Alpine-inspired menu, including items such as Cabot cheddar fondue and Belgian waffles, and winter cocktails like mulled wine and hot nutmeg buttered rum,” he said.

Cornelious said the rink has been popular with the locals, too, and a majority of the people who use it are Chicagoans. To get the word out about the curling rink, he said the hotel had an influencer event, and the hotel has received a good amount of press since “The Gwen is the only hotel in Chicago with a curling rink.”

He added that the real return on investment of having the rink and the cabin for the hotel is allowing The Gwen “to extend the life of the terrace beyond the summer months, providing our guests with another seasonal experience that is unique to our hotel.”

Rooftop igloos
The Envoy Hotel in Boston is in its third year of putting up pop-up igloos at the hotel’s Lookout Rooftop restaurant, said Mike Koshel, director of beverage at the hotel, via email.

The pop-up igloos are made of “marine-grade plastic” and PVC piping, he said, and can seat eight to 10 guests. The igloos are put up in November and taken down after Patriot’s Day (15 April), “which coincides with the Boston Marathon.”

“The igloos are illuminated by LED strips that are attached to PVC piping on the interior of the structure, which allows the igloos to host a rainbow of colors to highlight the seasonal activities happening at the Envoy and in Boston. For example, green for the Boston Celtics, red for Valentine’s Day, blue for Autism Awareness and Boston Children’s Hospital, etc.,” he said.

In the three years The Envoy has had the igloos, “the hotel has seen a tremendous uptick in the number of requests and reservations,” Koshel said. And the biggest benefit of it he’s seen is that it provides guests and locals with “a one-of-a-kind experience,” he added. 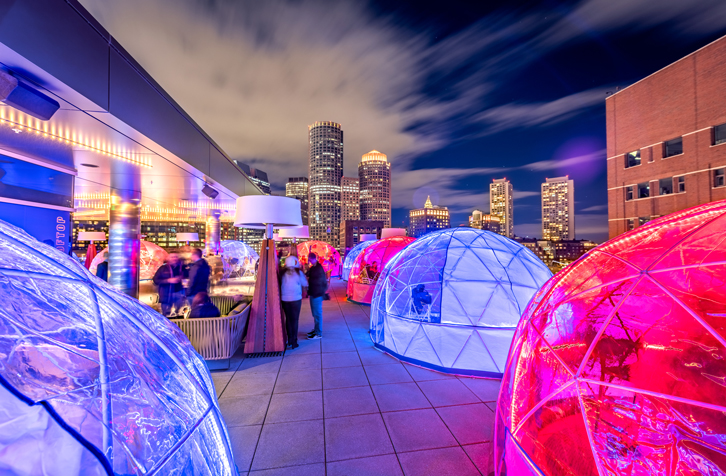 “Curling has exploded in popularity, and we saw an opportunity to bring this fun winter sport to our unique outdoor space, The Yard—our private outdoor courtyard. We utilize The Yard for a variety of events in the summer months … and thought that a curling rink would be the perfect way to make use of the space in the winter,” said Glenn Sampert, GM at the hotel, via email.

Like the Gwen, The Liberty Hotel also has an iceless rink made from synthetic materials that are easy to clean, Sampert said. The free curling rink has been a hit since it opened earlier this winter, he said, and the hotel is able to manage the number of people using it by taking reservations and letting people play a single game at a time.

Sampert said The Liberty Hotel is the “only hotel in the world with a ‘curling concierge.’”

“Our curling concierge, Mike, assists while you are curling with everything from teaching the game, to fetching the curling stones, to making cocktail recommendations,” Sampert said.

The hotel’s restaurant, Clink, also serves up a special curling-themed menu to guests. The executive chef at the hotel, Daniel Kenney, whips up items such as shishito pepper tempura with spicy kewpie mayo, which can be paired with curling-themed drinks such as The Stone’s Throw, which is made of “bourbon, amontillado sherry, carpano antico formula, black walnut syrup and Angostura bitters,” Sampert said.

He added that the hotel has gotten the word out about the curling rink via social media channels.

“The engagement we have seen on social media for curling, especially Instagram, has been amazing,” he said. “We’ve had a Facebook live stream of a local Olympic curling team member trying out the rink, we’ve had Instagram influencers curl and showcase their experience, (and) we constantly engage with our followers on our Instagram as curling provides such an Instagrammable moment.”

Another way the hotel has benefited from the curling rink is through individual and group reservations for the rink.

“It’s an opportunity to showcase our outdoor space in yet another capacity that is so unique and fresh and new,” he said. “The curling rink is also available for private bookings and events—we have seen a number of holiday parties and team-building events this winter so far, with more to come. The demand is there and we are thrilled.”