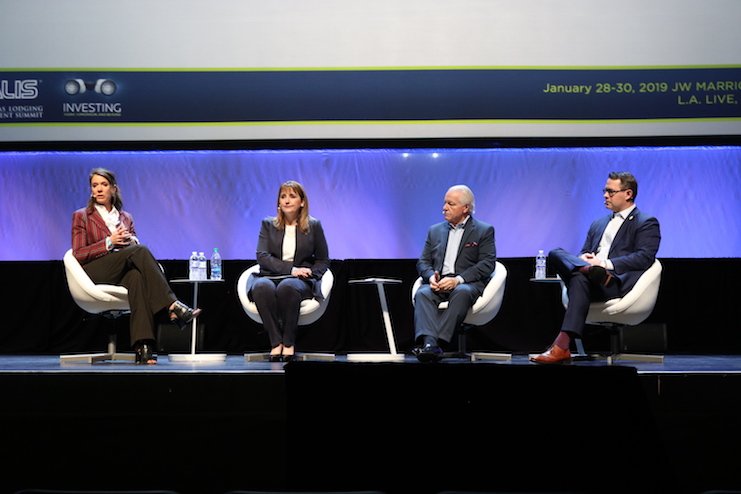 This week, thousands of hotel executives, investors, developers, and hospitality professionals from across the country gathered at the JW Marriott & Microsoft Theater in Los Angeles for the 2019 Americas Lodging Investment Summit (ALIS). According to James Burba, chair of ALIS and co-founder of BHN, this year’s conference was the largest in ALIS’ history, with 3,000 attendees, and also one of the more diverse conferences, with 22 percent women, the largest share compared to past years, and 15 percent Millennials. “The demographics are changing, and that’s really good for our industry,” Burba said.

The mood at the conference—a mix of optimism and caution—reflected the outlook for the lodging industry: continued positive performance through 2019 with some uncertainty beyond. During Monday’s Opening General Session, Burba noted that much of last year’s conversation centered around the future and the “inevitable end to the good times,” concluding that 2018 would be a good year. That forecast turned out to be correct, Burba added—the industry developed new hotels but didn’t overbuild, and performance was solid. “In the 34 years I’ve had of chairing this conference here in L.A., 10 years of consecutive growth has only happened one other time—1991-2001,” Burba noted.

The conference began with conversations around macro trends and current events that are impacting the industry—from global tourism numbers and labor challenges to the recent U.S. government shutdown. Geoff Ballotti, chair of the American Hotel & Lodging Association (AHLA) and president and CEO of Wyndham Hotels & Resorts, called attention to several issues that the industry is facing today during the Opening General Session: workforce development, guest and employee safety, ending online booking scams, and leveling the playing field with short-term rentals. Chip Rogers, president and CEO of AHLA, added that other issues include ADA lawsuits and addressing human trafficking.

Delving deeper into the issue of employee safety, Rosanna Maietta, executive vice president of communications and public relations for AHLA and AHLEF president Guest, held a conversation on stage with Tina Tchen, partner at Buckley Sandler LLP and co-founder of the Time’s Up Legal Defense Fund, who worked with the hotel industry to develop the 5 Star Promise program announced last year—a pledge to provide hotel employees across the United States with employee safety devices and a commitment to policies, training, and resources aimed at enhancing hotel safety, including preventing and responding to sexual harassment and assault.

“This last year and a half has been a time of pretty dramatic change around the workplace, around what’s happening between men and women in the workplace, around safety in the workplace, around how consumers are viewing brands that do or do not address issues of diversity, inclusion, and sexual harassment,” Tchen said. “What AHLA and leading hotel brands did was—for the first time as an industry across competitors—come together with this 5 Star Promise that is both comprehensive and very deep and bold in the commitments that are made, not just to the safety of your workers around the safety devices, but also to changing culture—to doing the training, to doing the deep work, to working with experts to make safer workplaces. When your employees feel safer, they are going to be in a better position to make your guests and your customers feel safer.”

In a panel with travel industry leaders, Roger Dow, president and CEO of the U.S. Travel Association, said that according to economists, the U.S. government shutdown cost the travel industry about $100 million a day. “You felt that if you had a property near a national park. You really felt it if you had properties in Washington or near government installations,” Dow said. “Hopefully this thing is quick and we don’t see it again, but all bets are off.”

Brian Crawford, senior vice president of government affairs for AHLA, added that much of the focus on the shutdown’s impact centered around government employees, but hotel employees also struggled as a result. “Our employees were an unintended consequence of the shutdown,” Crawford said. While legislation ensures back pay for federal workers, Crawford explains that hotel employees impacted by the shutdown suffered lost hours of work that they will not get back. Markets that rely heavily on government contracts experience major cancellations of groups and events, Crawford said, including Washington, D.C., Seattle, San Diego, Jacksonville, Fla., and Norfolk, Va. “Our employees are the ones that are bearing the brunt of that decision because those are lost wages.”

Another concern for the hotel industry is the shrinking share of inbound international tourism to the United States. In 2015, the share started slipping from 13.7 percent of global, long-haul travel down to 12 percent last year, Roger Dow said. “That little 1.5 in share loss is 100,000 jobs—that’s 25 Toyota plants, that’s two Amazon headquarters.”

The reasons behind this decreasing share, he said, range from the dollar’s growing strength, the weakening of international economies, the growth of low-cost airlines in Europe, and the message that the United States is sending to the rest of the world.

Gloria Guevara Manzo, president and CEO, World Travel & Tourism Council, added that travel security and infrastructure are critical issues as well. She noted IATA’s forecast that the number of airline passengers is expected to double to 8.2 billion over the next two decades—from a record 4 billion reported in 2017. “The question is, are we going to be able to grow 100 percent the number of airports we have and the capacity in the next 12 years or 14 years,” she asked. “There’s a huge opportunity to invest there, but the reality is that we need to be more efficient with how we manage these passengers.”

The hospitality industry has an estimated 900,000 job openings right now, said Brian Crawford. Combined with historically low unemployment, global competition, and lack of immigration reform, hoteliers are struggling to find and retain employees for their businesses. While the industry is taking action to develop talent across the country—including last week’s launch of the Hospitality is Working campaign—Crawford said legislators and policymakers must also work to address labor shortages.

“We’re being proactive—we have these amazing programs to recruit new workers and upscale our current workforce,” he explained. “We need the federal government to actually take action and pass comprehensive immigration reform because there are not enough domestic workers currently in the U.S. to fill our open positions.”